Global and China Rigid PCB Industry Report, 2014-2015 is primarily concerned about the followings:

PCB industry is fairly mature, with the growth rate generally not more than 6%. And the output value of rigid PCB vendors has long been declining. The year 2012 witnessed a hard time of rigid PCB vendors at a time when smartphone and tablet PC market showed an unexpectedly rapid growth, which sent rigid PCB vendors into fierce price war, thus leading to a drop in profit and revenue. Meanwhile, large PCB companies believed that the traditional rigid PCB had not enough growth potential so that they were beginning to shift their focus to FPCB and substrate. In 2013, almost all the rigid PCB vendors outside mainland China turned around, and even better in 2014 with a higher profit.

In the future, large PCB vendors will concentrate on FPCB and substrate while maintain the status quo for rigid PCB. The major vendors to expand substrate include Unimicron, SEMCO, LG INNOTEK, AT&S, DAEDUCK, Shennan Circuit, SIMMTECH, and the companies, such as Zhen Ding Technology, Young Pong and DAEDUCK GDS will go to the field of FPCB. However, only Ibiden will be committed to development of rigid PCB. In addition, some large vendors go directly into EMS field, such as Tripod Technology and Hannstar Board, the largest laptop PCB giant. This would make the future demand and supply of traditional rigid PCB more balanced, but the high-end Any layer and HDI will be obviously in short supply.

In 2014, the accelerated recovery of rigid PCB industry arises out of another reason—the retreat of Japanese PCB companies.

In November 2013, Japan’s Panasonic announced its decision to sharply reduce its PCB capacity globally, with 90% of its global capacity closed down by Q1 2015. In 2013, Panasonic’s revenue from PCB business, mainly involved the R&D of ALIVH (Any Layer Interstitial Via Hole) applied in smartphones, was approximately USD310 million. In March 2013, Panasonic was reported to cut down its PCB capacity in Taiwan and Vietnam. In mid-March 2012, the company established a factory in Dayuan Township of Taoyuan County, a move that was designed to compete for HTC orders. In 2013, however, the shipments of HTC presented a sharp decline, thus resulting in fairly low capacity utilization, hence the determination to withdraw the market.

Still, the Japanese automobile PCB vendor CMK also followed suit and announced in January 2014 that it would shut down its PCB factory YAMANASHI SANKO on April 30, 2014. Meanwhile, it would suspend the production of mobile phone multilayer PCB ALIVH products. Currently, it is Austria’s AT&S alone that uses ALIVH technology.

Japanese PCB also showed the tendency of mergers and acquisitions, with NEC-TOPPAN acquired by Kyocera in August 2013. In future, Fujitsu will also be very likely to sell its PCB business. And Daisho Denshi may merge with PCB business of Hitachi Chemical. 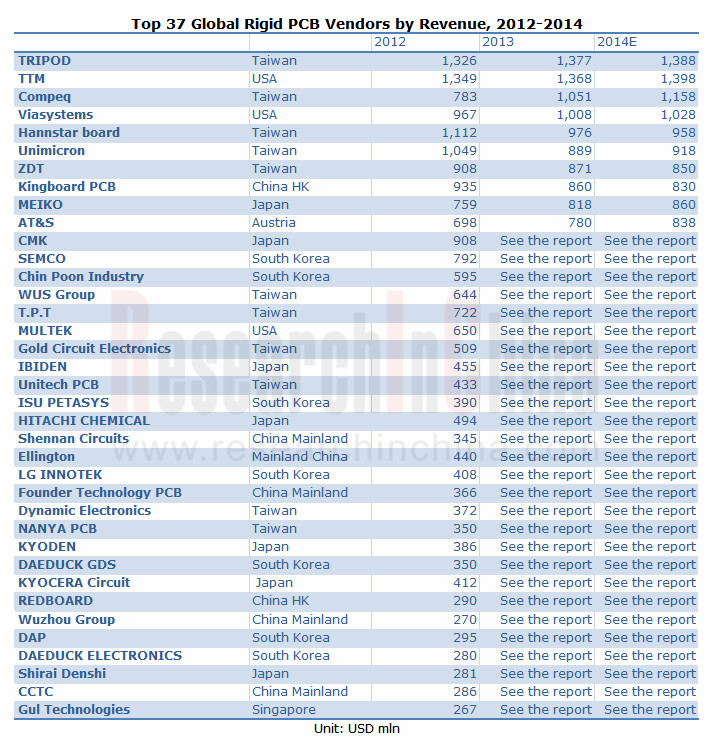